Biodiversity Law In Paradise - Day One

Every year, the students in Biodiversity Law travel with Professor Andrew W. Torrance to the Virgin Islands (U.S. and British) for an intensive week-long fieldtrip.  This is their dispatch from January 14, 2011: 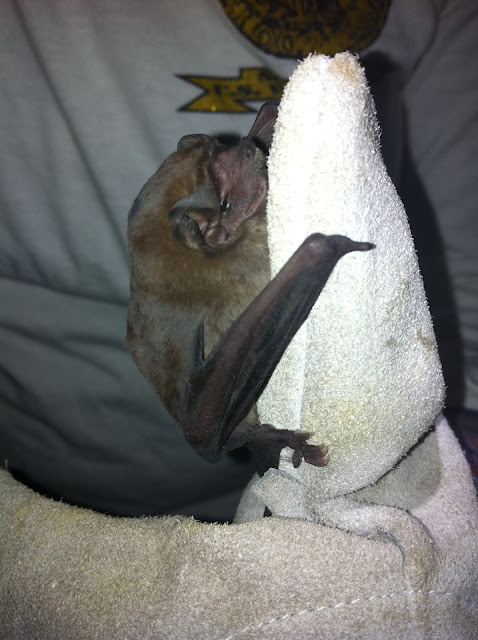 Professor Torrance informed us that we would partake in a traditional Saint Thomas Friday night activity;  we went bat catching.  We trekked along the beautiful shoreline of Magen's Bay before having the honor of meeting Saint Thomas' foremost advocate for terrestrial ecosystem preservation, Dr. Renata Platenberg.  She and two assistants, her devoted husband and a University of the Virgin Islands graduate student, mount mistnets in the forest once a month at dusk.  Various specimens of the island's five native species of bats occasionally find themselves tangled in the nets, perhaps a bit confused that their sonar failed them.  Promptly, the researchers delicately remove the tiny mammals (unfortunately, the process is delicate only for the bats-- a bat bite and some mild cursing was in progress when we arrived) and place them in pillow cases for weighing, measuring, and then safe release.  While the idea of petting a bat was both exciting and off-putting, the consensus among the class was that explaining a bat bite scar would be rather impressive, thus worth the risk.  We introduced ourselves to the little lady in the photo, who was soft as velvet and surprisingly cute.  Renata and her crew then examined the bats, recorded data, and returned them to their homes among the palm tree silhouettes.  The promise of Friday night island excitement panned out beautifully as we found a friend in Molossus molossus.  And we got a taste of the first step in determining whether a species might be threatened:  someone has to venture into the trenches, observe species first hand, and establish the scientific baseline that triggers the protective provisions of the Endangered Species Act.