The Nature Of The Firm

The journal Ecological Economics has published an article entitled "“Environment-selected directors”: An interactive simulation experiment of environmental representation on corporate boards" written by my colleagues and me. Here is the abstract:

Huge credit is due Professor Bill M. Tomlinson (University of California Irvine), who spearheaded this research project.  The full article is available for free here.

In an August 25, 2020, preprint article by Lemieux et al. posted on Medrxiv, entitled "Phylogenetic analysis of SARS-CoV-2 in the Boston area highlights the role of recurrent importation and superspreading events", a collaborative group of scientists from the Broad Institute and other institutions analyzed 772 complete SARS-CoV-2 genome sequences to trace the early spread of SARS-CoV-2 in Boston, including possibly at a fateful conference attended by participants from around the world.  Among their findings, the authors

present here an analysis of SARS-CoV-2 genomic epidemiology primarily in the Boston area, which was severely affected early in the US COVID-19 epidemic. Through dense sampling of the early phase of the epidemic we show the frequency of importation events—over 80 independent introductions—and the impact of early superspreading events in driving amplification and community transmission, likely accelerating the transition from containment to mitigation strategies.

They also suggest the following lesson:

This study provides direct evidence that superspreading events may profoundly alter the course of an epidemic and implies that prevention, detection, and mitigation of such events should be a priority for public health efforts.

Rapid sequencing of full genomes and powerful phylogenetic inference methods are proving themselves vital in our emerging understanding of the Covid-19 pandemic.
Posted by Andrew W. Torrance at 10:47 PM No comments:

From Kendall To Kure

Today I watched a wonderful documentary, entitled From Controversy to Cure: Inside the Cambridge Biotech Boom, about the birth and growth of the biotechnology hotspot that has emerged in Kendall Square, Cambridge, Massachusetts.  Here is the film:

FROM CONTROVERSY TO CURE - Inside the Cambridge Biotech Boom from MVP on Vimeo.

The Mantis Who Fell To Earth

This big beast fell from the sky right in front of me.  Given its size - about 10 cm - my guess is that it is an introduced Chinese Mantis (Tenodera sinensis). 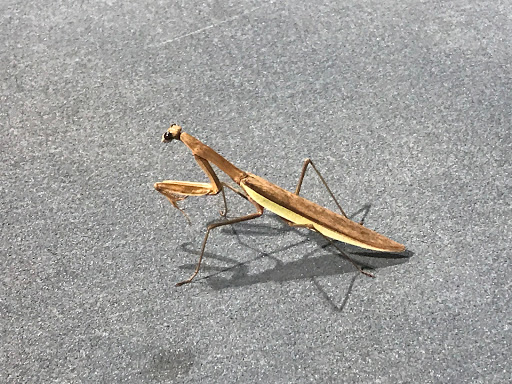 The Electronic Frontier Foundation ("EFF") has published an article about a patent tussle involving US Patent No. 9,839,852, entitled "Interactive Guitar Game".  Ultimately, this patent was held invalid by a Court of Appeals for the Federal Circuit panel in its June 11, 2020, decision, Ubisoft v. Yousician, transforming Guitar Hero into guitar zero.

Since 2005, a population of lizards has kept me company as I read on my front porch.  They pop out of and dive back into cracks between bricks of my front pathway.  While outside their burrows, they forage frenetically through leaf litter.  Yesterday, I spotted the largest individual I had ever seen.  I managed to take some closeup photographs of this big dark brown and black lizard, one of which is reproduced below.

I formerly identified these lizards as Common Five-Lined Skinks (Plestiodon fasciatus), in part because the smaller ones have five cream-colored stripes on their backs and sides, and sometimes have bright blue tails.  However, close scrutiny of my new photographs has changed my mind.  Now I think my lizards are Broad-Headed Skinks (Plestiodon laticeps), which can sport stripes and tails similar to those of their close relative, the Common Five-Lined Skink, but tend to be considerably larger, and have five scales on their upper lips between their noses and eyes.  The main challenge in identifying these lizards has been their constant activity, vigilance, and impressive speed.  No lounge lizards they.

Posted by Andrew W. Torrance at 3:27 PM No comments: