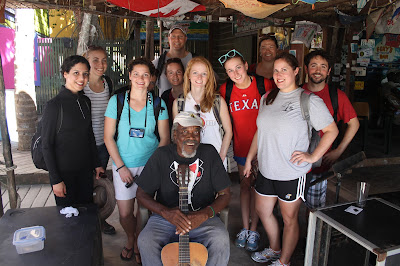 The Biodiversity Law class began its first full day in the Virgin Islands with a voyage across the channel from the United States Virgin Islands to Jost van Dyke, a small, but beautiful part of the British Virgin Islands.  After clearing British immigration, we met Sir Foxy Callwood, the founder of the Jost van Dyke Preservation Society, and Susan Zaluski, who has heroically led the Society for the last six years.  Foxy and Susan share with the class their insights in how to establish national parks and marine protected areas, monitor seabird breeding islands, including some of the largest in the world, eradicate destruction invasive species, such as mongoose, rats, cats, and goats, and protect endangered species, such as sea turtles and the Virgin Islands Tree Boa.  A highlight of the day was anchoring off Sandy Cay (a perfect tropical island that was formerly Laurance Rockefeller), swimming to its beach, and then hiking throughout the entire island, which is rapidly reestablishing its natural character after the Society eradicated all its invasive rats.

Tomorrow the class heads to Botany Bay, the most biodiverse part of Saint Thomas, to hike its rainforests and snorkel its healthy coral reefs.
Posted by Andrew W. Torrance at 9:16 PM